This is Becoming a Habit (and I'm Glad)

On this day last year I wrote about how surprised and pleased I was to hear from a long-lost and very dear friend. She sent me an utterly unexpected e-mail message and really made my birthday a happy one.

Come to think of it, I guess I can't call her "long-lost" because she has certainly not been lost; if anything I guess I have. But I know where I've been...pretty much. It's really contact that was lost.

Today, in any case, she managed to astound me again, by calling me on the phone!

I hadn't been having a particularly good morning, as I proceeded with the now weeks-long task of packing up the accumulated stuff in my erstwhile office. Tomorrow's the last day for removing what remains of my possessions in the office I've occupied for many years. The company has moved to a new office, and they're vacating this building. I have a single desk there instead of multiple desks, bookshelves, and file drawers, and I've been sorting and packing and transporting stuff for longer than I would have believed possible (or necessary). There's just one carload left, though, or at least I hope so. In any case it has been tiring and rather depressing.

Hearing my old friend's voice wishing me a happy birthday and talking about old--and new--times immensely improved my outlook, and once again, with even greater intensity, made my day!
Posted by Balefire at 6:34 PM 0 comments

A Glimpse of the Future

Many, even most, of you know that I've been writing a weekly column for my employer for a few years now. Called Glimpses of Japan, it started as a column in a company internal news magazine and was intended to introduce or explain Japanese customs, trends, pastimes and the like to non-Japanese employees both here and abroad. Some time after that magazine was phased out, I was asked to revive the column--but this time aimed at English-reading Japanese--as a tool to attract repeat visitors to the company website. Before long it was moved from the company website to a "mail magazine", so people could subscribe to it and have it sent to their PCs or cell phones.

The idea was for me to write a fairly brief piece about whatever I--as a long-term foreign resident--considered worth commenting about regarding Japan, whether observations or opinions. I was billed, with some justice, as being "karakuchi"; when used about wine or sake, that means "dry", but about comments I guess it is best translated as "acerbic" or "caustic". I'm often enough cynical, and I suppose I've been caustic enough to deserve the label.

The column, a blog of sorts, seems to have been fairly popular, and it produced some thoughtful and thought-provoking comments from readers. Now, out of a desire either to economize or to reduce my workload, or both, the column has been discontinued. The last installment is here while it lasts; I'm not sure at the moment whether the archived back numbers will continue to be available.

Except for a few holidays, I had to submit Glimpses by every Friday afternoon to a colleague for formatting and uploading; sometimes work schedules moved the deadline to Thursdays.  Once I started this private Balefire blog as an experiment, I had to be concerned about avoiding duplication, but since my posts here are erratic and rather infrequent, that wasn't really much of an issue. Meeting a weekly deadline, often when other work deadlines were also yapping at my heels, was an issue, and sometimes quite a tricky one. There were times when I just didn't have anything to say offhand by Wednesday night or thereabouts, so I watched a lot of late-night news programs in ambush mode, waiting for something that would provoke a sarcastic comment from me...and a topic for the next column.

I'm not going to miss some of the stress associated with six years' worth of weekly deadlines. On the other hand, I'm something of an excitement junkie so I probably will miss some of the end-of-week pressure and adrenaline. I've also already been told by a few readers that they're going to miss Glimpses, so--tentatively for now, since my work situation is going to be in a state of flux for  awhile--I intend to increase the frequency, and probably the average length, of my posts here. Although I'm not going to be writing specifically for  non-native readers of English, a lot of the posts are likely to be on the sorts of topics I chose for that column, and I'll probably include some expressions and figures of speech chosen with that audience in mind. Rather than explaining what might be obscure to that group, though, I'll solicit questions as comments, and answer any questions there.

At least, that's the plan for now, if one can justify calling  a glimpse into a possible future a plan.
Posted by Balefire at 10:45 PM 0 comments

When I was very young, reading some of my grandmother's collection of old Reader's Digest magazines, one of the ubiquitous little filler items--sometimes jokes, sometimes household tips, sometimes witty observations--caught my attention and tickled my imagination. This one merely reported that there was a pink log cabin with a sign saying "Frenchy's Chinese Oasis" in someplace like Minnesota, but I have remembered it for half a century.

The memory of that incongruous and eclectic restaurant image was stirred when, 10 years or so ago, I first saw a flyer advertising Arun's. "Reggae Shot Bar", it said, and "Bangladesh Food". I find odd combinations like that fascinating, almost irresistible, and I visited Arun's that very evening. I wasn't disappointed, either.Their selection of rums was better than usual for Tokyo, the reggae music was well chosen, the food was uninspired but definitely tasty , and the prices were reasonable. As for the interior decoration, I think that the next time somebody asks me to explain what "funky" means, I'll send them to observe the decor at Arun's as a learning experience.It's pleasantly bizarre and comfortably shabby, and I quite like it. 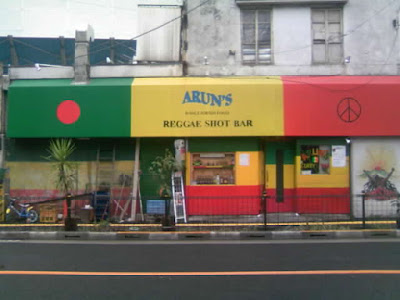 This is a very recent picture, showing the relatively new awning and (mostly) repainted exterior.  There's a more artistic one here (be sure to click the "image info" button in the upper right) that seems to be from 2008 and shows details of the old awning, and a customer-written review here from late 2006 with some shots of the interior and a couple of the dishes on the menu.

Arun's is only about a few minutes' walk from Oimachi Station, and it's worth a visit even if only to bask in the mildly surreal atmosphere for the time it takes to drink a little rum and maybe eat a samosa.
Posted by Balefire at 4:11 AM 1 comments

Caution is the Quay

All day Sunday every channel on TV had a blinking, color-coded tsunami warning map of Japan overlaying about 20% of the screen, much/most regular programming was replaced with tsunami news, and coastal areas were constantly subjected to a barrage of PA system and emergency services vehicle announcements warning people near the water to evacuate and to stay away from the seashore.

The waves from the Chile earthquake arrived in due course, with less force than had been feared, but with some pretty dramatic scenes of quays submerged until nothing but the tops of bollards could be seen, and waves rushing upstream in rivers.

Earthquake-prone Japan is no stranger to tsunamis; almost 200 have been recorded. In 1498 one even washed away the building that once housed the Great Buddha in Kamakura, a considerable distance from the nearest beach. More recently, the 1993 Okushiri tsunami killed nearly 200 people with a wave over 30 meters high. The memory of the 2004 Indian Ocean tsunami is still pretty fresh, and there have been many documentaries and news stories since then about the potential danger of tsunamis. One originating as far away as Chile is not lightly dismissed here: it is often mentioned that the one caused by the 1960 Chile earthquake killed 199 people in Japan. So the government, quite rightly, was not inclined to take this newest tsunami threat lightly.

There are always some people who fail to exercise sufficient caution (I hesitate to say "common sense", because it so demonstrably often isn't that common). Quite a few surfers rushed right out to the Pacific beach at Kujukuri, Chiba, intending to surf the tsunami, and had to be warned back by the local police. I predicted this scenario...I've known a lot of surfers.

Perhaps less understandably--but equally predictably--one of the remote camera video feeds on the news showed a couple of people who went down to a harbor edge, in one of the areas with the highest warning level, at the height of the first tsunami wave. They were apparently undaunted by the fact that the quay was inundated by a wave almost sufficient to cover the tires of vehicles parked on it, and deep and strong enough to force the guys to climb atop a block wall. What motivated them to head for the sea when 70,000* people around the nation's coasts were heading away from it to shelters, and after several hours of persistent warning announcements, is a mystery to me.


*This was the figure that seemed most reliable at the time I wrote this post, a little after midnight Monday morning; later in the day other numbers were published, including the probably pretty reliable ones from Japantoday.com quoting a Kyodo News estimate of 520,000 nationwide ordered to evcuate, of whom 320,000 were in Aomori, Iwate, and Miyagi. They say "About 30,000 people actually moved to public evacuation centers, according to the Kyodo News estimate", but it's not clear to me whether that's a nationwide total or referring to the people in those three prefectures only.
Posted by Balefire at 3:57 PM 2 comments