Can you make it all a little less old?

Another rock legend has left the stage. I just learned that Meat Loaf passed away, probably from COVID-19 in combination with his already poor health, on January 20th.

By coincidence and because of the time difference, that day marked three years since I broke my leg and was set onto a path of hospitalization, surgery, rehabilitation, and--in a head start on my colleagues just prior to the pandemic's effects--exclusively remote work. I had forgotten the anniversary, actually, until the sad news about Meat Loaf, and the mention that he was 74, brought the date, and the time, and the years, into sharper focus. I'll be 72 in a couple of months, and it hasn't been that long since my physique rather resembled Meat Loaf's in his--for want of a better term--prime.

When closing time came for Leonard Cohen, he was 82...but I was only 66. When Charlie Watts  put his sticks down for the last time this past summer he was 80...but I was already 71. Meat Loaf was only a couple of years older than I am, and his passing was a stronger memento mori for me than I expected. Or needed, really.

Due to some lifestyle changes beginning in the late '70s, most of my initial exposures to new songs around then came by way of my car radio. I don't recall anymore exactly when it was, but when I heard "Paradise by the Dashboard Light" for the first time, I had to pull the car over to the side of the street and listen, rapt and amazed and amused. No song before or since has elicited that response from me. "Let me sleep on it", indeed. I've since had to struggle several times to explain that phrase to Japanese friends, but it was always worth it when realization dawned.

Seeing it performed on TV video clips and more recently on the internet of course added a lot to the experience: Meat Loaf was a hell of an actor as well as  a powerful singer. He was certainly worth watching, whether he was playing a (long ago) "barely 17, and barely dressed" youth, or Eddie in The Rocky Horror Picture Show, or the enigmatic Beast-like character from the music video for "I'd Do Anything for Love (But I Won't Do That)".

That last song contains the rather grim line "It'll all turn to dust and we'll all fall down". That does seem to be pretty much inescapable, but before that happens I'd like to live with the passion and energy that Meat Loaf put into his performances. The lyrics also include the "Can you make it all a little less old?" line, and I believe that he's done that, and it's worth emulating. He may seem to be an unusual role model, but  he's a worthy one in many ways. We're diminished by his loss, but enriched by his memory.

Posted by Balefire at 7:14 PM 0 comments 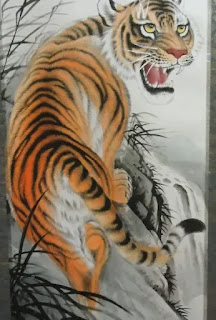 I wish all of my relatives, friends, and other readers a very happy, healthy, exciting, and prosperous Year of the Tiger!

I was born in the Year of the Tiger, specifically in what's called a year of the Metal Tiger--I've also seen it called Gold Tiger--among the five elemental types, the others being Wood, Fire, Earth, and Water (this year's).

While not a believer in astrology regardless of the culture, Oriental, Occidental, or otherwise, in which it's rooted, I do find the lore amusing and intriguing, and perhaps it is worthwhile to consider the supposed characteristics of the year's representative animal, with a view toward maximizing the strengths and minimizing the weaknesses which I do find in my own character.

Not surprisingly given the model, people born in the Year of the Tiger are said to be courageous, competitive, and self-confident, but also to tend to be impetuous and overindulgent. Metal Tiger people are said often to display strong will power and endurance, to have a positive  and passionate approach to life, and to have unwavering faith in themselves, even to the extent of obstinacy.

As I progress in my current quest for a return to full mobility and unimpaired health, aiming at once again being fully functional and entirely self-reliant, I expect the frequent demands on my courage and confidence to continue. I don't believe that I have ever lacked passion or sheer will, but I'm sure that the rehabilitation professionals around me, therapists and care managers and medical staff alike, would--if they were disposed to be candid instead of discreet--express concern about my tendency to be a bit reckless, or at least insufficiently circumspect.

I do often want to pounce when it would be more advisable to plod.

My care manager rolls her eyes and looks worried when I talk about riding a motorcycle again, and the therapists look pensive but no longer dubious. They do regularly counsel caution and a measured, low-risk approach. There appears to be consensus among them that it's something of which I have to be reminded rather frequently. I can't honestly disagree.

I am looking forward to more extensive driving, and use of public transportation more frequently and for longer distances. I am hoping in the relatively near future to be able to greet in person the doctors, nurses, and therapists who contributed to my recovery during my long hospitalization, to show them how well their efforts have succeeded. There is also a good chance that before too long I will again be able to commute physically to my employer's office in Tokyo, to join my colleagues in person even if it's only a couple of times weekly while the pandemic restrictions continue. I'm not going to be averse to a bit of carousal when the opportunity arises, either.

It's the first day of a new year, and too early to predict how things will turn out in the next few months. I have no doubt that dealing effectively with the coming months will require me to be brave and bold, and if at times I'm a bit too brash, well...one doesn't often see blenching tigers.

May the coming year be a very safe, happy, prosperous, and exciting one for you and yours, and may it be a much, much better year than the ones that preceded it.

Posted by Balefire at 5:22 PM 0 comments