On my first day in Japan, I arrived with only about five US dollars in my pocket. I made the silly mistake of getting it changed to yen as soon as I arrived at the airbase in Yokota...before I found out that you couldn't spend yen at the shops on the base. That turned out to be a mixed blessing: I couldn't buy anything until after I'd been left to my own devices in Yokosuka, so I still had most of my money left in the evening when I went to explore the area outside of the Navy base's gates.

At the time, the exchange rate was 360 yen to the US dollar, and the 1800 yen I got for my $5 had quite a lot more buying power than it has now. For example, a small bottle of beer cost 150 yen if memory serves, which is probably half of what it is now, maybe less. I say "probably" because it has been a very long time since I bought a small bottle of beer.

Naturally, I intended to investigate a local bar as one of my very first off-base actions, but before that I wanted something to eat. By the time we had arrived in Yokosuka after being driven down from Yokota, it was too late to do the administrative tasks such as checking into the command, getting billeting assignments, and the like, and it was too late to get a meal  in the mess hall. I'd gone most of the day without anything to eat, so after getting directions and a basic language lesson--more about that in another post, one of these days--from the guy standing watch at the barracks, I set out in search of food and a beer.

Within a minute or two of leaving the base, I was captured by an irresistible aroma, and led to a corner yattai food stall/cart selling charcoal-grilled skewered chicken: yakitori. You don't see many yakitori yattai these days, especially not the mobile, hand-drawn ones like that one was. They tend to be vans nowadays, and they set up shop outside of supermarkets more often than in entertainment districts. Considering it now, I suppose that the one I encountered on my first evening in Japan was probably getting most of its business from the bartenders and hostesses and shopkeepers in the area.

In any case, a few skewers of yakitori were my first "meal" in Japan, and they were delicious, fulfilling the savory, sweet, smokey promise that had caught me downwind. In commemoration of my first meal in Japan, a half-century ago, tonight's dinner centered on yakitori. 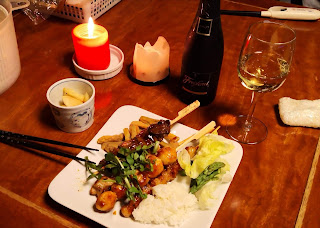 
The kanji in the title says "rainichi kinenbi (han seiki)", which means "anniversary of arrival in Japan (half a century)". As of today I've lived in Japan for that long, and although most years I have some sort of celebration on this date, they're usually fairly low-key, mostly an excuse to have a few more beers than usual, or an additional bottle of champagne. Fifty years is a nice round number, though, and a pretty big one, too.  Since I''m temporarily less mobile than I would prefer to be, and since places where I'd like to go to celebrate are closed in any case as a pandemic countermeasure, the time seems right for quieter celebration, and perhaps some reminiscence.

The 30th of last month was my 70th birthday, but it had less impact on me than my 50th, when I finally had to concede that I'd entered middle age. In at least one way it had less impact than my 25th birthday: I'll probably never forget walking into my office in the morning and being greeted by my secretary with "Good morning! So how does it feel to be a quarter of a century old?" That almost had me looking around for a skull or skeleton or some other such memento mori in the scene; my erstwhile feeling of invulnerability took a hit that day, and while no less callow because of it, I became somewhat less carefree. I had been in Japan for just under five years then.

My arrival in Japan followed a chartered 707 flight from Travis Air Force Base in California to Yokota AFB in Fussa, western Tokyo, with a refueling stop in Anchorage, Alaska. Less than two weeks after my 20th birthday, and after an extended succession of farewell parties, I got my first impressions of Japan from the plane's window: the astonishingly beautiful Mount Fuji, the rugged mountains beyond and around the Kanto Plain below, and the brilliant azure blue of thousands of tile roofs in the sunlight.

Later in the day I and my equally young Navy comrades would be driven through Yokohama at evening rush hour to our duty station of Yokosuka Naval Base. One of the two strongest impressions from that long but fascinating ride was  the beauty of the sakura fubuki (桜吹雪), the "cherry blossom blizzard" of petals whirling snowstorm-like in the spring wind. The other was the--bizarre, to me at the time--ubiquity of surgical masks; I couldn't believe that so many medical personnel had forgotten to remove their masks before heading home. Our driver explained the mask wearing custom, and although I quickly became accustomed to it, the current pandemic-related increase in masked people echoes for me a chord struck on that first of my days in Japan.
Posted by Balefire at 8:20 PM 0 comments