Until this last April, the area we were heading for had been within the radiation exclusion zone, and the residents―many of them elderly--have only recently been able to return and try to deal with the results of the earthquake and tsunami of March 11, 2011. Unlike the relief supplies delivery/distribution trip at the end of May, this time the plan was to help with clearing debris and cleaning up. After a brief stop at a 7/11 to get food and drinks for breakfast and lunch, we drove to the volunteer center, arriving just in time for the registration process, briefing, work assignments, and gear/tools issue.

I didn't count, but there were probably several dozen volunteers, some locals and some from at least as far away as Osaka. When the leaders of each group were asked to come up and  receive their assignment descriptions and map packages, I was surprised to see that one group of a half dozen or so were wearing Tokyo Electric Power Company (TEPCO) uniform work clothes. Whether this contingent from the infamous TEPCO were motivated by individual desire to help clean up the mess after the long delay for which their company was largely responsible, or by orders to demonstrate the company's commitment to help, I had no idea. I also had no confidence that asking one or all of them would get me a believable response: having seen too much prevarication and obfuscation from TEPCO already, I wouldn't believe them whatever they said, which probably says a lot about just how bitter and cynical I can be. I was impressed that nobody, including the local volunteers who have far more reason than I to be bitter about TEPCO, exhibited so much as a glare or angry mutter.

After the work assignments were distributed, the various groups gathered what they'd need from the stocks at the center. Our group, augmented to 14 people by some other volunteers including local foreign residents Sarah Jones and Kate O'Berg, had been assigned a combination demolition and debris clearing job. We were to go to a house a few minutes' drive away, owned by an elderly gentleman. Located on slightly higher ground and somewhat farther from the shore than some of his less fortunate neighbors, he'd been spared tsunami damage, but the earthquake had destroyed most of a concrete block wall surrounding his property, as well as producing a lot of assorted debris such as broken roof tiles, crockery, garden tiles, and the like. We were to finish the demolition of the wall that nature had mostly destroyed, and move the debris to a common refuse pile a few hundred meters closer to the ocean, for later permanent disposal. We loaded up a small pickup truck with wheelbarrows, sledge hammers, picks, shovels, and other gear, and drove over. 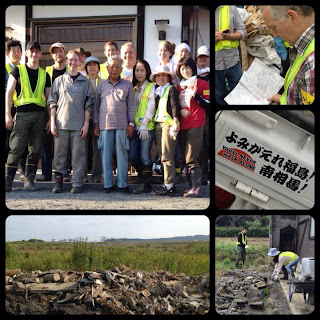 That wall had been built well. Breaking it into smaller chunks took a lot of effort. So did loading the concrete pieces and twisted rebar into our truck and another small pickup the property owner provided, driving to the refuse pile, and throwing the debris onto the pile...over and over again. With 14 of us working at it, though, and efficiency increasing with experience, we finished the job right down to removing the gravel, by four or so in the afternoon, with an hour break for lunch. The owner was ecstatic: he hadn't expected to be able to get the place cleaned up until next year. 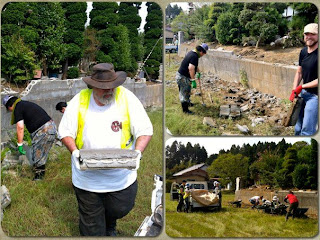 It was tedious work, but directly rewarding. While we were at it, we were sobered by the vistas of devastation left by the disaster. From the refuse pile all the way to the sea virtually everything had been washed away. Across a narrow road from the pile was the shell of a house that had been wrecked but not quite washed away; another crew was clearing up around that.

At one point,  a couple of us had to drive back to the volunteer center to get a pair of heavy bolt cutters to snip rebar-and-concrete chains into more manageable sizes. We ended up taking a very long route around, because we mistook the closest road for a one-way going in the wrong direction. When we came back, we realized our error: it only seemed to be a one-way road, because most of the lane going the other way had collapsed and been washed away. Having seen hundreds of meters of mangled guardrails, many patches of peeled-away asphalt roadbed temporarily replaced with gravel, and several vehicles--some barely recognizable as having once been cars--deposited in fields or in the middle of wave-scoured areas that had once been paddies or residential areas, I suppose we should have guessed. 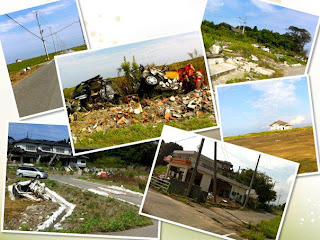 [Scenes of devastation around Odaka. Photos by Jeremy Wilson.]

Once we'd returned the tools and truck, we went to a spa further back in the mountains for a shower, then to a Korean barbecue restaurant near where we were staying, for dinner and drinks, then on to small bar for a few more drinks and some karaoke. We were joined there by another volunteer, Florian Valiente, who had just arrived from Tokyo, and before long went back to our accommodation to sleep in preparation for the next day's work.