Up early on Sunday morning, we were ready to return to Odaka, but Saturday's  warm fair weather had been replaced by a steadily worsening rain. Learning that the weather caused outdoor work to be cancelled, Andrew announced a change in plans: we'd be helping with food and water distribution in five temporary housing areas around Minamisoma closer to where we were.

By the time we'd made the short drive to the local volunteer center, it was raining so hard that everyone headed for the nearest convenience store to buy vinyl raincoats. I'd brought along a "water resistant" hooded windbreaker, but it resisted the rain for about the first 20 meters from the car to the shop. Even the L-size raincoat I found was designed for someone a lot smaller than I am, but it did at least serve to keep my wallet dry, and the double hood kept cold water from running into my collar and down my back.

We waited a while for the truck to arrive, then began the process of distributing supplies. The first housing area was nearby, just a short walk from the volunteer center. The remaining four areas were relatively short drives away, and the same basic  method  was followed each time. Many of us already knew the drill from previous occasions, once for me last May, several or even many times for some members of the group.

It's pretty simple: set up several folding tables, break out some wheelbarrows, unload the various items into sections on and beneath the tables, distribute X amount of Y item depending on how many people each resident in the queue is picking up for and how may of Y have been allotted per person or residence (two liters of water, one bottle of soy sauce, three potatoes, two oranges, and so on), keep replenishing the cases of vegetables, fruit, water, etc., from the truck as they're emptied, either collapse the empty boxes or hand them to the residents for carrying the supplies.

A couple of people in the truck pull cases from palleted stacks and hand them to those outside, who in turn move them to the tables or below them to speed replacement up a bit, others count and hand the items to the residents. The elderly or infirm who are unable to line up have their allotment delivered to them by still other volunteers using the wheelbarrows.

All of this is made considerably more difficult when it's done in a deluge. Reserve cardboard cases quickly turn to pulpy sludge if they're set on the wet asphalt ("wet" here meaning "flowing in a centimeter-deep sheet of water"). That's assuming that the boxes haven't come apart in your arms on their way through the meter or two between the truck and the tables. Wet cardboard boxes don't stack worth a damn, either, nor do they hold up well as containers over even a short wheelbarrow journey. Wet hands and slippery oranges and onions lead to inadvertent juggling and chasing. Communication becomes difficult and efficiency drops as discomfort rises. 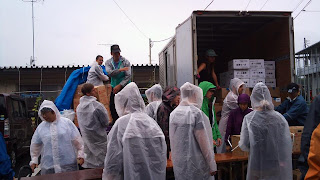 Very quickly, rigging a big grometted tarpaulin--the ubiquitous "blue sheet" found in construction zones and on trucks everywhere--became a vital first step in the process, strung up from whatever was handy, to provide shelter for the area between the truck and the distribution line. Sometimes finding suitable anchor points, and ways to prop up the sagging center that always threatened to become a pond and collapse the tarp and/or drench someone even more (one guy stood for a half hour or so holding up an umbrella to keep the center of the tarp raised and the water flowing off it), provided quite a challenge.

But the job got done, and done relatively quickly  Everybody got soaked, but none of the volunteers, I'm sure, even considered complaining: what's getting wet compared to having to live in temporary housing, with few prospects for work, often with family or friends' tragedies still fresh in mind, possessions crushed and/or washed away, and sometimes with the knowledge that your property is behind a no-go barrier, maybe one that will be there for decades.

After we visited the last area, we visited a community center where some of the volunteers from Osaka cooked up some Kansai specialties, takoyaki and okonomiyaki, and we gratefully snacked on those, some fruit salad, cakes, and bitter green tea that had been donated by local organiztions. We were extremely grateful, too, to the local company that donated dozens of towels for the volunteers to dry off with. After this, we were offered a late lunch/early dinner of curry and rice at another nearby center, but our group elected to pass on that in favor of an earlier return to Tokyo. We made a brief stop at the spa again for a shower. I passed on that and took a short nap instead...the prospect of getting nice and clean but dressing again in soaking wet jeans didn't appeal, so I made do with changing into a dry T-shirt and socks, and dozed a bit before the return trip.

Going back wasn't bad, actually. The traffic wasn't as heavy as I'd expected, the rain and fog in spots was a little heavy but not a big problem, there were no more than the usual number of incompetent drivers to be avoided (tailgaters and weaving trucks, mostly), and I was highly motivated by the beer waiting at the end of the trip.

Back in Meguro after six hours or so, I let off a couple of my passengers at the station near which I'd parked, visited the Black Lion with Jeremy Wilson, the last of the crew from my car, met Andrew to settle up expenses--serious kudos to his company en world for subsidizing fuel and toll costs!--had a couple of beers, went off to sleep for a couple of hours, got up shortly before the crack of dawn, and drove back to Saitama.

It was a long weekend, and I put around 1000 kilometers on the car, but it was a very rewarding one, too, and I'm looking forward to the next opportunity to visit Fukushima.